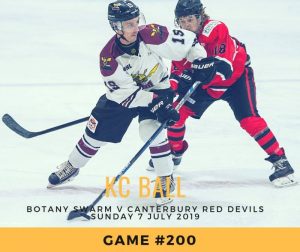 KC has been an integral part of the club, having represented the club since the inaugural NZIHL season way back in 2005 and was a vital part of the Birgel Cup champion teams in 2007, 2008, 2010 and 2011. This season is his 15th in the league and he is one of only three remaining players to have played in every NZIHL season.

KC has been a consistent offensive threat over this time, bringing up 200 NZIHL points last weekend against the Red Devils in Christchurch. Incidentally, KC also played his 100th and 150th games against the same opposition!

He not only contributes on the ice – he is an active member of the Botany Swarm Board, has acted as the club’s Treasurer over the past several seasons, and has previously also acted in a player-coach role.

Congrats KC on this milestone. We are very proud to have you as part of the Botany Swarm family.