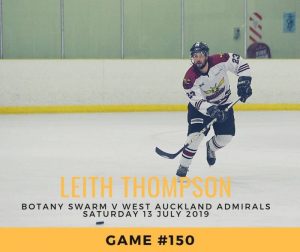 Congratulations to Leith Thompson on achieving his 150th game for Botany Swarm.

Leith is one of only four members of the Botany Swarm who were part of the inaugural 2005 New Zealand Ice Hockey League season when the team was known as South Auckland Swarm. He has been a stalwart member of the squad and has represented New Zealand in various age group divisions over the past fifteen years of his ice hockey career.

Leith has been a key part of the Swarm’s defensive core over the years. Although typically a stay-at-home type defenseman, his rainbow wristshot from the blue line still makes an occasional appearance.

Congrats on your milestone achievement, Leith. We are proud to have you as part of the Botany Swarm family.