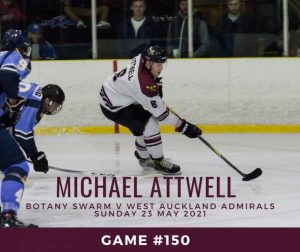 Congratulations to Michael Attwell on achieving his 150th game for Botany Swarm.

The match-up against West Auckland Admirals at The Hive on Sunday 23 May marked Michael’s 150th NZIHL game.

Michael made his debut in the league as a 17 year old in 2009, and it didn’t take long for him to taste championship success, with back-to back Birgel Cups in 2010 and 2011. As a consistently solid and dynamic 2-way centreman, he has tallied 103 points – 41 goals and 62 assists – over 12 years in the league. Michael truly bleeds maroon and white, having not only served as the team’s Assistant Captain since 2014, but also as the club’s Assistant Manager since 2018, a role he still holds to this day