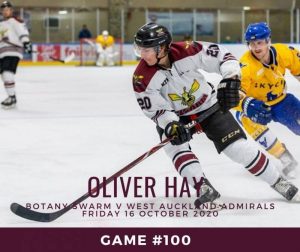 Olie made his debut in the league as a 16 year old in 2013, and after making the move from forward to defence back in 2017, he has become a mainstay on the Swarm blue line. Offensively minded and not afraid to throw his body around, he has now tallied 55 points – 11 goals, 44 assists and 362 PIMs in his seven years in the league.

An emerging leader who will be a vital part of the Swarm line-up for many years to come, the Botany Swarm family congratulates Olie on becoming just the 10th Swarm player to reach the 100 Club.