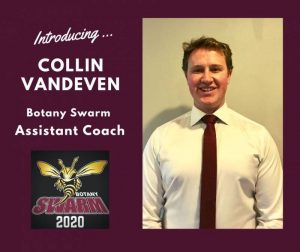 Collin has been appointed as Botany Swarm Assistant Coach.

Collin’s coaching career began as a skills development coach working with all ages and levels of players, but he showed an aptitude towards improving the abilities and knowledge of Canadian Junior hockey players. He has had major success coaching at the U15AA and U18AA level and has amassed years of experience behind the bench and on the ice.

He is a native of Saskatoon, Saskatchewan, Canada and began playing ice high level ice hockey at a very young age. After finishing his playing career, he concentrated on coaching where he utilised the knowledge gained via the Hockey Canada coaching system. His background in exercise and sport studies also helped his focus into coaching.

Collin recently moved to Auckland in January 2020 to begin his studies at the New Zealand College of Chiropractic. He brings a passion and knowledge of the game which makes him a good fit to be joining the Botany Swarm as an Assistant Coach alongside Head Coach, Phillip Fourie.

Swarm General Manager Travis Crickard is excited about the hiring of Collin as an Assistant Coach. “Collin was very attentive to detail during the interview process and demonstrated the knowledge and commitment that Swarm required to help lead our group. We would like to welcome Collin to the Swarm family!”