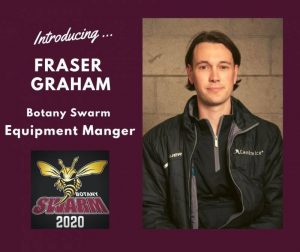 Fraser has been re-appointed as Botany Swarm Equipment Manager.

He has always loved ice hockey, but never knew it existed in New Zealand until a close friend dragged him along to “Learn to Play” session a few years back. He was instantly hooked and now spends most of his days around the two ice rinks in Auckland.

Fraser started playing in the Auckland Senior non-check league in 2013 and currently plays for the Grizzlies – a division B team. He also plays in the BHL/FHL during the summer season.

He has worked at Paradice Ice Rink Avondale for the past five years and has also spent some time working at Centre Ice, learning about hockey gear and its performance and the way it functions when kept in good condition. This experience puts him in great shape to look after the team’s equipment needs.

Whilst working at Paradice, Fraser studied a a Bachelor of Creative Enterprise – Majoring in Graphic Design and Illustration. He now works full time at Sila Limited (Centre Ice and The Dugout) as their Graphic Designer.

Fraser enjoys what the hockey community has to offer and has again taken up the position of Botany Swarm Equipment Manager to give back.

Swarm General Manager Travis Crickard is excited about the re-appointment of Fraser as Equipment Manager. “I admire Fraser’s love and enthusiasm for the game. His attention to detail over the past two seasons will ensure that team’s equipment needs are fully taken care during the upcoming Showdown Series against the West Auckland Admirals. We would like to welcome Fraser back to the Swarm family!”