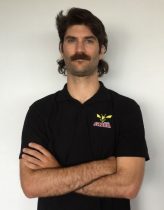 The Botany Swarm would like to welcome Joel Rindelaub to the 2019 management team.

Originally hailing from Minnesota (USA), he has been involved with the Botany Swarm for the past two seasons as both a player and a coach. He has also become a recognisable face in the New Zealand ice hockey community, providing broadcast commentary for the Ice Blacks and helping contribute to the Puck Yeah! media coverage of the sport. Before arriving in New Zealand, Joel had experience in NCAA competition as well as youth ice hockey development.

Outside of the rink, Joel is an active researcher and lecturer at the University of Auckland in the School of Chemical Sciences, focusing on the environmental and forensic science applications of analytical chemistry He also is a freelance writer, publishing articles for Stuff, Newsroom, and US-based magazines. In his free time, Joel enjoys tramping across New Zealand and creating musical-verbal art.

Joel’s diverse background and dedication to ice hockey in New Zealand make him an ideal fit for a continued role with the Botany Swarm. He is very excited to be working with GM Travis Crickard, and he looks forward to helping develop an exciting product for Swarm fans in 2019.