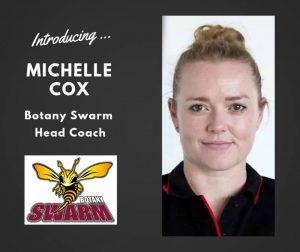 Michelle has been appointed as Botany Swarm Head Coach.

Michelle has a long ice hockey playing history in Auckland. She grew up playing in the Men’s representative age groups until becoming the founding member of the Women’s representative programme in Auckland. Michelle played for the New Zealand Ice Fernz for 16 years from 1997 through to 2013 until shifting to Australia and where she played for the Sydney Sirens in the AWIHL for two seasons. Her focus on coaching began when she coached the Sydney Wolfpack in the Australian Junior Ice Hockey League from 2015 to 2017. She was also Head Coach for the NSW State Bantam team in 2016, leading them to a gold medal win for the season.

Recently, Michelle shifted back to New Zealand and took up the position as Assistant Coach of the NZ Women’s U18 national team for the past two seasons.

Her passion for the sport accompanied with years of playing and coaching experience, puts Michelle in a great position to lead the Botany Swarm through the 2019 season as Head Coach.

Michelle says: “I’m very excited to be part of the Swarm family and am so looking forward to the upcoming season. With Corey McEwen coming on board to assist me as player/coach, it will enable us to combine our joint skills on the bench this year.”