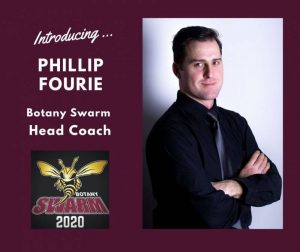 Phillip has been appointed as Botany Swarm Head Coach.

Phillip has always been passionate about high energy and extreme sports, whether it be rollerblading, BMXing, shark diving or surfing. In his late 20’s he discovered an exciting new adrenaline rush playing ice hockey for the Ice Hawks Club in Pretoria, South Africa. He found so much enjoyment in playing the game that he was further inspired to start coaching alongside a combination of local as well as world class international coaches visiting the country.

Soon after moving to New Zealand in August 2018 with his wife Jeanine, Phillip quickly found an ice rink to get back into the game. He began coaching at Paradice Botany and was appointed an assistant coach for the AIHA with the Learn to Play, Bantams and Junior teams.

Phillip is an ambitious and energetic coach who takes pride in putting in the extra effort to developing, encouraging and improving players across all ages and skill levels. He particularly loves the technical aspect involved in skating and is very focused around strategic gameplay.

Phillip believes the key to achieving success is the effort put into preparation. He is determined to work hard with the Botany Swarm to make them a strong, skilled team to be reckoned with during the 2020 NZHIL season.

Swarm General Manager, Travis Crickard was closely involved with the hiring of Phillip as the Head Coach. “Phillip’s response to the entire recruitment process has been highly professional. We are thrilled to have Phillip on board this year to lead our team in another successful ice hockey season. We would like to welcome Phillip to the Swarm family!”