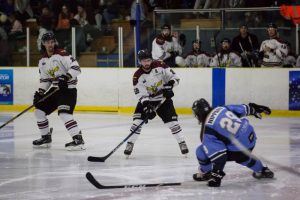 END OF FIRST PERIOD
The score after the first twenty minutes stands at 1-0 for the Admirals.
The Swarm had some good pushes, and a couple of close calls for Attwell and Kozak in particular, but were unable to convert on a brief powerplay.
We will start period two with 41 seconds of 4-on-4.

END OF SECOND PERIOD
The score is 2-1 favouring the Admirals after two periods, with the middle frame a particularly chippy affair.
The Admirals extended their lead as Nippard scored his second, but Michael Attwell cut the lead in half with a laser from below the left circle.
With twenty minutes left in regulation, the Swarm will start the period with 1.42 of powerplay time.

END OF REGULATION PLAY
At the end of regulation, the visitors take this one 4-1. The Swarm pressed hard throughout the final frame, with plenty of good chances, but the Admirals were able to capitalise with two quick goals in the last two minutes.
We’ll be back for the start of the regular season on Saturday 25 May at Paradice Botany, playing the Canterbury Red Devils.
We’ll see you then, Swarm fans, and LET’S GO SWARM!