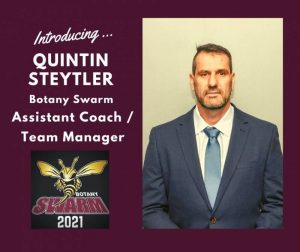 Quintin has been appointed as Botany Swarm Assistant Coach/Team Manager.

He is originally from Cape Town, South Africa and started his ice hockey career as a youngster, playing both nationally for the Western Cape regional team and internationally when he represented his birth country.

He started his coaching career in 2010 with teams in the hockey league in Cape Town. South African Ice Hockey Association (SAIHA) introduced Quintin to USA Hockey who had brought Bob Mancini out to coach the senior national team and restructure SAIHA coaching programme. Quintin was selected as a coach for this programme which consisted of Athletic Development Module (ADM) followed by Level 1 and Level 2 coaching.

Quintin was the South African Men’s National Team Manager from 2011 to 2015.

Quintin and his wife, Nicole arrived in Auckland in 2018 and has already become an important part of the New Zealand ice hockey family. He is involved in the extremely important feeder programme – “Learn to Play – Kids and Adults” as well as assisting with both the Bantam and Junior ice hockey leagues. He brings knowledge and passion of the game which makes him a good fit to be joining the Botany Swarm as an Assistant Coach/Team Manager alongside Head Coach, Phillip Fourie and Assistant Coach, Collin Vandeven.

Swarm General Manager Travis Crickard is excited about the hiring of Quintin. “Quintin is a great fit and is committed to the Swarm team. He is 100% behind our group and will ensure the wheels run smoothly during the 2021 NZHIL season. We would like to welcome him to the Swarm family!”