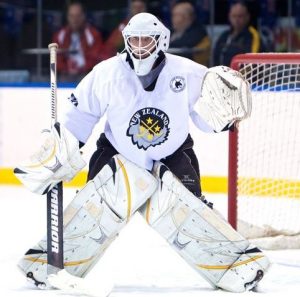 Botany Swarm are thrilled to announce that veteran goaltender Rick Parry will be moving across town for the upcoming 2019 NZIHL season.

Parry, 31 is arguably one the greatest goaltenders in New Zealand ice hockey history. He is the most capped NZIHL (158 games) and Ice Blacks (49 games) goaltender of all time, and also holds the New Zealand record for international shut outs (3) and wins (18). He was named Most Valuable Player at the 2016 Division 2B World Championships in Mexico, and won the Best Goaltender award at the Division 2B World Championships in Auckland a year later. Parry has also picked up two NZIHL team MVP awards along the way, and was a big part of the recent success of cross-town rivals West Auckland Admirals, helping them to reach the playoffs in more recent years, and achieving a maiden NZIHL championship in 2018.

It is a homecoming of sorts for Parry, who suited up for the (then) South Auckland Swarm in the inaugural 2005 season at just 17 years of age. After a two year stint in Canada, Parry returned to NZ to play between the pipes for the West Auckland Admirals and Dunedin Thunder. After seasons in France and Australia, he then played a further five seasons for the Admirals, culminating in their first ever Birgel Cup last year.

“The last few seasons, it’s been evident that the Swarm have been rebuilding. I feel that they are now in a position to be solid Birgel Cup contenders, with the hunger to win, and have put the pieces in place to be successful in 2019. I feel I can add a lot of value to the team both on and off the ice, and I’m looking forward to the journey ahead” says Parry.

We look forward to you being a part the journey too, Rick.