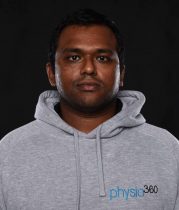 Sunny has been re-appointed as Botany Swarm Physio/Team Medic – a position which he held during the 2018 season.

His favourite treatment is dry needling. The use of laser therapy for a quick injury recovery is a close second.

Sunny brings a calm and professional approach to the medical requirements of the Botany Swarm team. He is always willing to go above and beyond and during the upcoming 2019 season, will ensure our team is fighting fit for each New Zealand Ice Hockey League game.