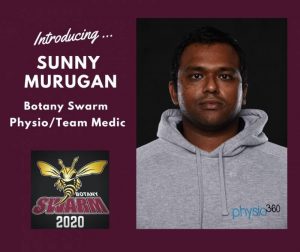 Sunny has been re-appointed as Botany Swarm Physio/Team Medic.

His favourite treatment is dry needling. The use of laser therapy for a quick injury recovery is a close second.

Sunny brings a calm and professional approach to the medical requirements of the Botany Swarm team. He is always willing to go above and beyond and during the upcoming 2020 season, will ensure our team is fighting fit for each Showdown Series game.

Swarm General Manager Travis Crickard is excited about the re-hiring of Sunny as Swarm Physio/Team Medic. “Sunny’s past two seasons with our team have kept our players strong and competition fit. His professional attitude towards the health and safety of each player is paramount. We would like to welcome Sunny back to the Swarm family!”